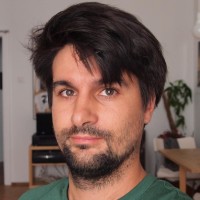 Posted on 16 September 2013 by Michael Bauer

Recently, I was at Chicas Poderosas in Bogota - the three day event featured talks on two days and a hackday on the last. During the event I was approached by Natalia an industrial designer who introduced a project of hers: Electrocardiogr_ama. She wanted to build an app with similar features and pitched it on the hackday. I’ve ended up working with Natalia and Knight/Mozilla Opennews Fellow Sonya Song on the project.

Using D3 for visualizing the output was quite straigt forward. But then, we wanted to have some easy to use user input - we graded mood on a scale, but how to represent it best? Numbers from 1-x as they are often used didn’t seem very intuitive (is 1 best or 10 best?). After thinking about it for a while we had an idea of using a smiley as a slider - the smiley would smile if happy and look sad if dragged to a sad status.

see it working here (try draging it up and down):

To read it’s value we use the following code.

If you want to see it in action: try out the Moodlog app, or check out the github repo.