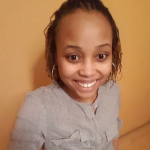 On March 3, communities around the world marked Open Data Day in over 400 events. Here’s the dataset for all Open Data Day 2018 events.

In this post, we will harvest Open Data Day affiliated content from Twitter and analyze it using R before packaging and publishing the data and associated resources publicly on GitHub.

With over 300million monthly users [source, January 2018], Twitter is a popular social network that I particularly like for its abbreviated messages, known as Tweets. Twitter’s Standard Search API allows users to mine tweets from as far back as a week for free.

R is a popular programming language for data analysis and has an active community of contributors that add to its capabilities by writing custom packages for interacting with different tools and platforms and achieving different tasks. In this post, we will employ two such packages:

To get started, create a new application on apps.twitter.com and take note of the API and access tokens. We will need to specify these in our R script.

We are now ready to read tweets from the two official Open Data Day hashtags: #opendataday and #odd18. With a maximum number of 100 tweets per request, Twitter’s Search API allows for 180 Requests every 15 minutes. Since we are interested in as many tweets as we can get, we will specify the upper limit as 18,000, which tells the twitteR library the maximum number of tweets to retrieve for us.

In the R script snippet above, we assigned results of our search to the variables tweets_opendataday and tweets_odd18 and called the two variables to view the entire list of tweets obtained. Lucky for us, the total number of tweets on either hashtag are within Twitter’s 15 minute request limit. Here’s the feedback we receive:

Here’s a snippet of the list obtained from the #opendataday hashtag:

Since the entire lists are long (~11,500 tweets on the #opendataday hashtag) and hard to comprehend, our best bet is to convert the lists to data frames. In R, data frames allow us to store data in tables and manipulate and analyse them easily. twitteR’s twListToDF function allows us to convert lists to data frames. After scraping data, it is always a good idea to save the original raw data as it provides a good base for any analysis work. We will write our data to a CSV file, so we can publish and it widely. The CSV format is machine-readable and easy to import into any spreadsheet application or advanced tools for analysis.

Here’s what the first five rows of our data frame look like:

Data analysis in R is quite a joy. We will use R’s dplyr package to analyse our data and answer a few questions:

We can answer this using dplyr’s select() function, which as the name suggests, allows us to see only data we are interested in, in this case, tweets sent from the Twitter for Android app. 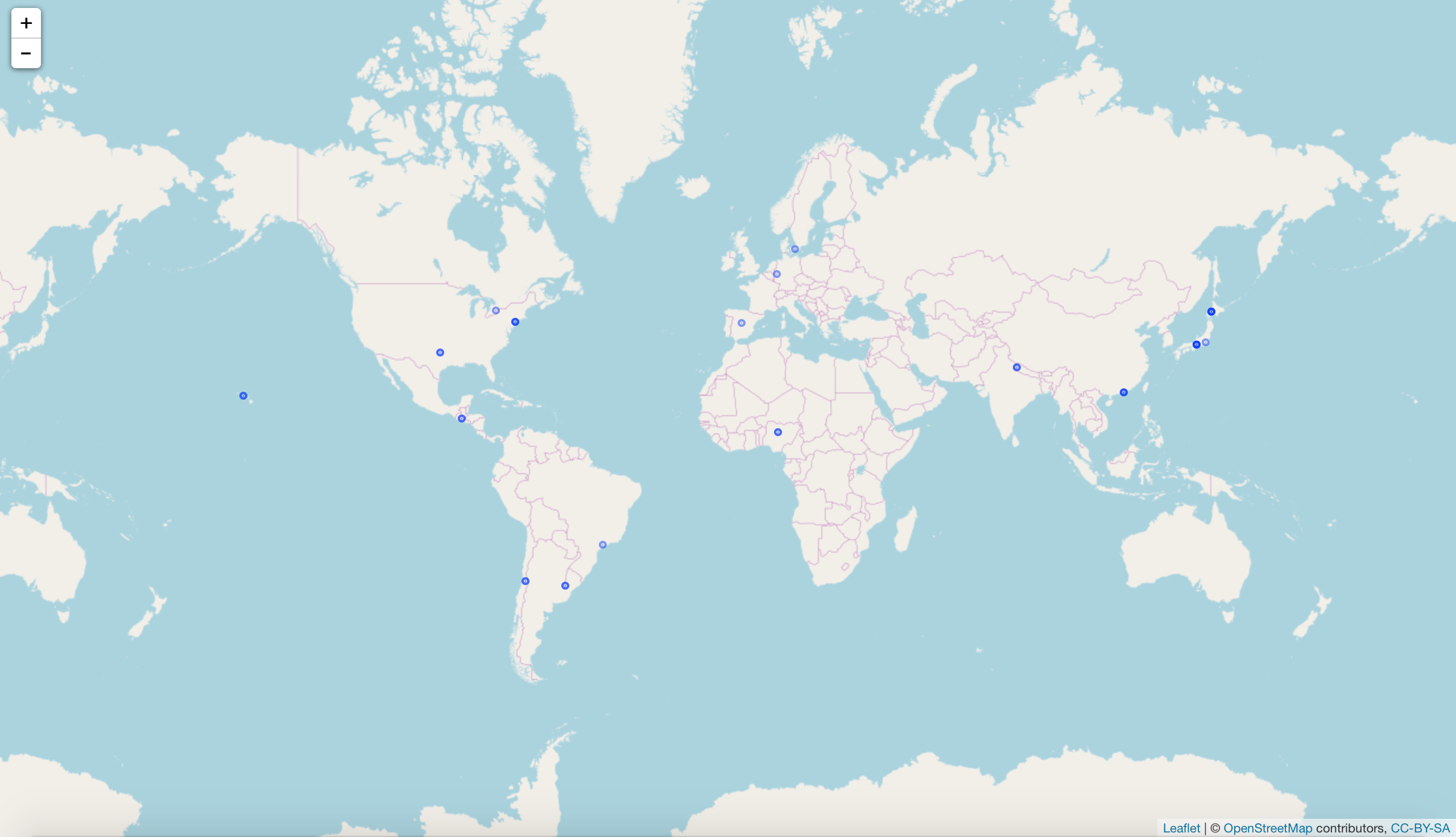 Due to Twitter’s terms of use, we can only share a stripped-down version of the raw data. Our final dataset contains tweet IDs and retweet count, and will be packaged alongside this R script, so you could download the tweets yourself.

Packaging the Data and associated resources

Providing context when sharing data is important, and Frictionless Data’s Data Package format makes it possible. Using datapackage.r, we can infer a schema for the all tweets CSV file and publish it alongside the other resources.

Read more about the datapackage-r package in this post by Open Knowledge Greece.

Alternatively, we can use the Data Package Creator to package our data and associated resources. 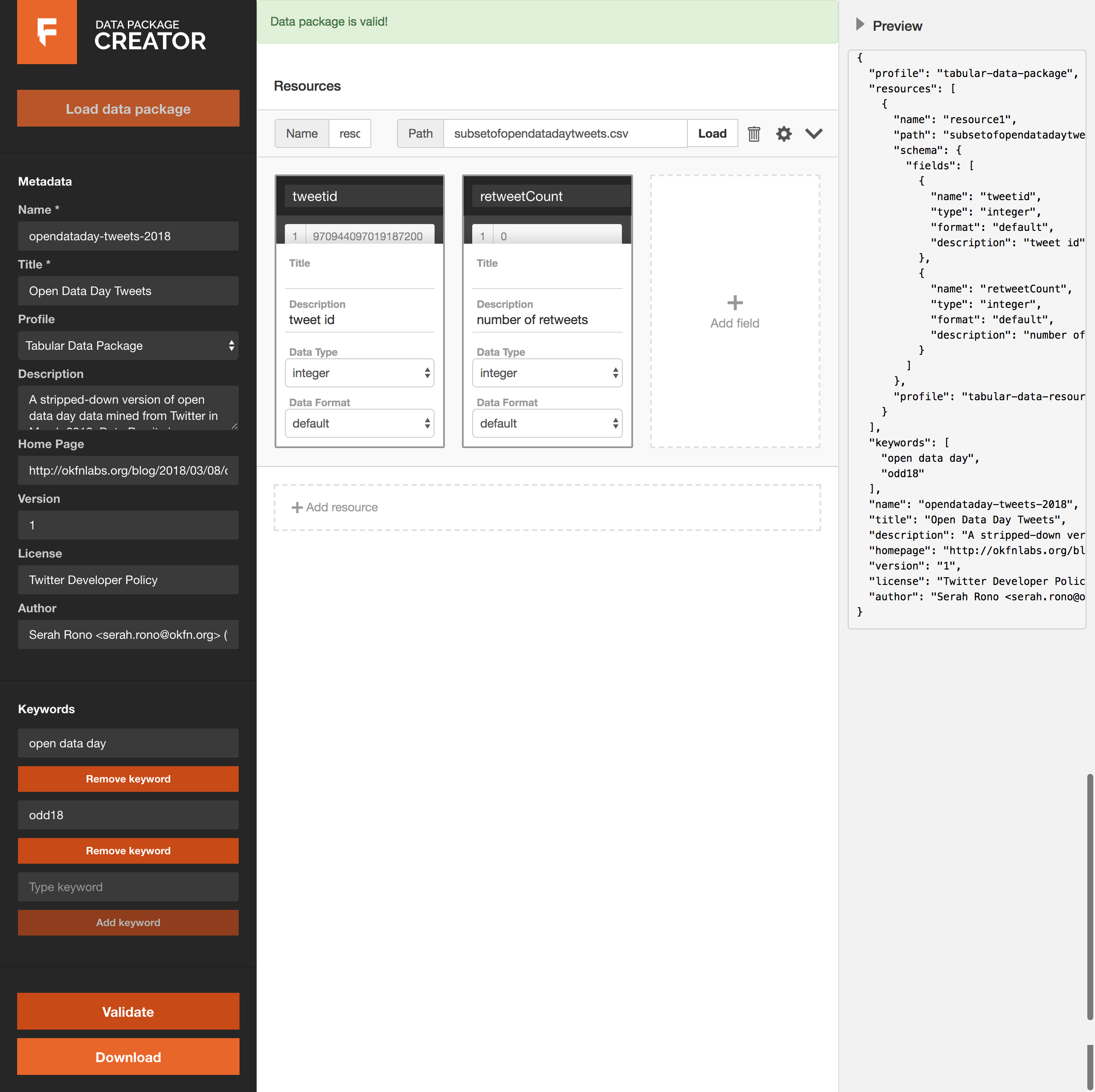 Read more about the data package creator in this post.

Once our data package is ready, we can simply publish it to GitHub. Find the open data day tweets data package here.

Data Packages are a great format for sharing data collections with contextual information i.e. we added metadata and a schema to our final dataset. Read more about Data Packages in Frictionless Data and reach out in our community chat on Gitter.